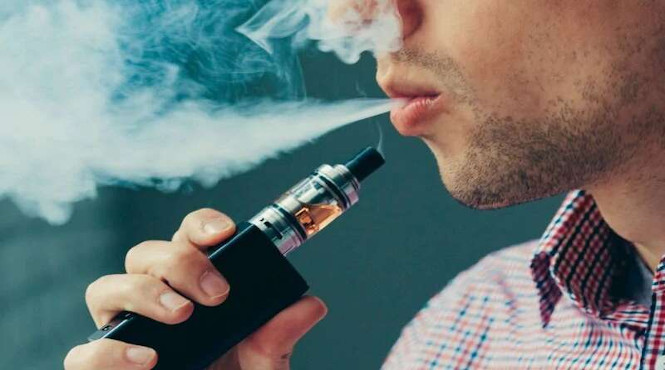 Adult smokers who vape are more likely to quit using cigarettes, according to a study released Monday. But e-cigarettes also increase the risk of relapse in some former smokers, the researchers found.

"This study is the first to point out that even if smokers may succeed in stopping smoking with the aid of electronic cigarettes, they still need to be monitored by doctors and health professionals to prevent a relapse in the long term," said Ramchandar Gomajee, the paper's lead author and a researcher at France's Pierre Louis Institute of Epidemiology and Public Health.

The findings suggest that e-cigarette use may affect current and former smokers differently: helping people addicted to cigarettes kick the habit, perhaps, but also drawing some who had already quit back to smoking.

The study, published in the medical journal JAMA Internal Medicine, tracked more than 5,000 daily smokers for an average of two years in France. It found that smokers who vaped used fewer cigarettes per day and were more than one and a half times as likely to quit completely.

But researchers also looked at more than 2,000 former smokers and found that those who used e-cigarettes were more likely to relapse back to smoking. "Thus, while [e-cigarette] use can help persons reduce their smoking levels in the short term," the researchers wrote, "there is no evidence that it is an efficacious smoking cessation aid in the long term."

Newer e-cigarettes may reduce the risk of relapse

The study did find that the heightened risk of relapse disappeared in those who quit smoking more recently, which the researchers said may be due to improved e-cigarette technology.

For example, the study as a whole considered anybody who quit smoking from 2010 onward and found that, in that sample, vaping increased the risk of relapse. But when researchers only considered people who quit cigarettes as of 2013, former smokers were not more likely to relapse if they vaped.

The researchers noted in their study that "measures of plasma nicotine levels have shown that, compared with older models of [e-cigarettes], the new generation delivers higher levels of nicotine to the bloodstream," which may make them more satisfying.

Other "technical improvements in [e-cigarettes] over time," they said, may also explain why people who recently quit smoking and switched to e-cigarettes were less likely to relapse than those who quit earlier.

Gregory Conley, president of the American Vaping Association, said that e-cigarettes have undergone drastic changes in recent years. "Prior to technological advancements made around 2013, e-cigarette devices were difficult to use and only effective for the most dedicated of would-be quitters," he said.

Devices used years earlier "bear no resemblance to current technology," he said, "so using ancient data is not particularly helpful to understanding whether vaping products can help smokers quit today."

It's unclear why vaping heightened the risk of relapse in some former smokers, but Gomajee noted that "[people] who are using electronic cigarettes are still addicted to nicotine." If they have withdrawal symptoms but can't vape, or if their vape isn't satisfying, then "they are likely to smoke again," he said.

Prior research has highlighted some of those same risks while also showing that e-cigarettes may be an effective tool to quit smoking.

Earlier this year, for example, researchers in a separate study found that e-cigarettes were almost twice as effective at helping smokers quit cigarettes than traditional nicotine-replacement therapy, such as nicotine patches. But 82% of people who vaped didn't quit smoking after a year. Among those who did quit cigarettes, 80% continued vaping.

That's consistent with other research on "dual users," which suggests that vaping may temporarily lead to lower cigarette consumption without convincing users to quit smoking entirely. For example, one study published in 2017 found that a majority of dual users abandoned e-cigarettes and continued to smoke only tobacco after two years.

A study published this year in the Journal of the American Heart Association, for example, found that vaping and smoking were both linked to a similar increase in the risk of heart attacks. Using both, the study found, was riskier than using either alone.

The research comes at a time of intense scrutiny for e-cigarette companies.

On Friday, a US district judge placed a ten-month deadline on e-cigarette companies to apply to the US Food and Drug Administration for public health review. Products that don't submit applications by the May 2020 deadline can be removed from the market by the FDA, while those that submit applications can stay on the market for up to one year while under review.

Critics say aggressive marketing tactics have fueled an epidemic of teen vaping, but manufacturers maintain that their products are an alternative for adult smokers.

To Dr. Robert Jackler, founder of the group Stanford Research into the Impact of Tobacco Advertising, that alternative comes at a cost.

"While e-cigarettes may be a potential off ramp for adult smokers," he said, "they have proved to be a heavily traveled on ramp to nicotine addiction among youth."