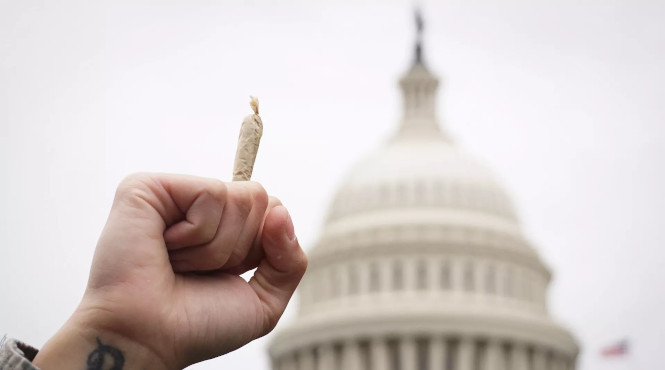 The House Judiciary Committee passed the Marijuana Opportunity, Reinvestment and Expungement (MORE) Act in a 24-10 vote on Wednesday, setting the stage for a full floor vote.

The vote saw two Republicans—Reps. Matt Gaetz (R-FL) and Tom McClintock (R-CA)—join their Democratic colleagues in support of the bill.

Debate on the bill generally followed two tracks. Republican lawmakers argued that the bill was being rushed and that it should be subject to additional hearings, while Democratic members responded that there’s been enough debate on the issue and that there’s no time for delay in beginning to reverse decades of harms of prohibition enforcement.

On the other hand, some GOP members who recognized that the status quo is untenable pushed for legislative action on a separate piece of bipartisan cannabis legislation—the Strengthening the Tenth Amendment Through Entrusting States (STATES) Act—which does not contain social equity elements or formally remove marijuana from the Controlled Substances Act and would simply leave cannabis policy up to the states, arguing that a scaled-down approach would fare better in the Senate.

“We may need something a little less than MORE,” Gaetz said.

The approved legislation, introduced by Chairman Jerrold Nadler (D-NY), would federally deschedule cannabis, expunge the records of those with prior marijuana convictions and impose a five percent tax on sales, revenue from which would be reinvested in communities most impacted by the drug war.

It would also create a pathway for resentencing for those incarcerated for marijuana offenses, as well as protect immigrants from being denied citizenship over cannabis and prevent federal agencies from denying public benefits or security clearance due to its use.

“These steps are long overdue. For far too long we’ve treated marijuana as a criminal justice problem instead of a matter of personal choice and public health,” Nadler said in his opening remarks. “Arresting, prosecuting and incarcerating people at the federal level is unwise and unjust.”

“I’ve long believed that the criminalization of marijuana has been a mistake,” he said. “The racially disparate enforcement of marijuana laws has only compounded this mistake with serious consequences, particularly for minority communities.”

House and Senate members, and outside legalization advocates, cheered the bill’s committee approval.

“The passage of the MORE Act represents the first time that the Judiciary Committee has ever had a successful vote to end the cruel policy of marijuana criminalization,” NORML Political Director Justin Strekal said. “Not only does the bill reverse the failed prohibition of cannabis, but it provides pathways for opportunity and ownership in the emerging industry for those who have suffered most.”

Earlier, lawmakers that have advocated for cannabis reform held a press conference in advance of the vote on Tuesday to highlight the need for the federal policy change. And while Nadler said that it was possible that compromises could be made later in the legislative process, he doesn’t see the need to scale back the proposal’s reach at the onset and feels that bipartisan support will build around his bill.

He also told Marijuana Moment that he is optimistic the legislation will get a full floor vote before the end of the current Congress, and part of that confidence comes from the fact that his panel has been communicating with other committees where the bill has been referred in the hopes that they waive jurisdiction to expedite its advancement.

Rep. Doug Collins (R-GA), ranking member of the committee, said he does “believe we need to change our attitudes and our processes because the federal government has completely failed in this area,” but that he doesn’t support the MORE Act.

Several amendments were introduced during the markup.

Nadler put forth an amendment to his own bill, which was adopted, that simply adds a findings section noting the racial disparities in prohibition enforcement and the lack of equity for communities targeted by the war on drugs in the legal cannabis industry.

Rep. Ken Buck (R-CO) offered an amendment that would replace major provisions of the MORE Act with the STATES Act, but he didn’t request a roll call on it following its defeat on a voice vote. Nadler responded to the proposal by noting various issues such as banking and veterans’ access that the STATES Act doesn’t clearly address since it doesn’t deschedule cannabis.

“If we pass the bill that we want, and the Senate passes a different bill, we can negotiate,” the chairman said. “That’s what conference committees are for.”

Rep. Cedric Richmond (D-LA) filed an amendment that would expand the justice reinvestment provisions of the bill. The measure, which was meant to clarify that provisions aimed at helping people most harmed by the war on drugs are not limited to individuals but could also be used to invest in community-wide efforts such as mentorship programs, was approved.

Rep. Sheila Jackson Lee (D-TX) put forth a proposal, which was accepted without objection, to require the Government Accountability Office and National Institute on Drug Abuse to conduct a study examining the demographic characteristics of people convicted of federal marijuana offenses.

Buck filed a second amendment requiring GAO to study the societal impact of legalization, and it was adopted on a voice vote.

Much of the conversation during the markup, even among Republican members, involved recognition that prohibition isn’t working and federal policy should change regardless of personal opinions about cannabis.

“I don’t sing the praises of marijuana, I simply recognize the limitation of our laws and also the limits on my ability to try and run everybody’s lives for them,” McClintock (R-CA) said.

McClintock introduced an amendment that would have divided tax revenue generated from legal cannabis sales between local law enforcement and the general revenue fund within the Treasury Department, but it was ruled not germane, with the chairman saying its provisions fall under the jurisdiction of the Ways and Means Committee.

The committee vote comes two months after the House approved a bill that would protect banks that service state-legal cannabis businesses from being penalized by federal regulators. That vote ignited a debate within advocacy circles about whether Congress should pursue incremental reform that might be more amenable to the Republican-controlled Senate first or instead focus their resources on passing comprehensive legalization legislation that addresses social equity from the outset.

Prior to the vote on the marijuana banking bill, several advocacy groups, including the ACLU, urged House leadership to delay the action until wide-ranging reform cleared the chamber.

Many observers expect the MORE Act to receive a favorable vote if it reaches the House floor. The bill’s fate in the Senate is much less certain, however, and may depend on the kind of compromises that Nadler said he hoped to avoid.

This markup garnered significant attention, as it represents the first of its kind that isn’t simply a debate about whether cannabis prohibition should be ended—which occurred in a House subcommittee over the summer—but an actual vote on a bill that would accomplish legalization.