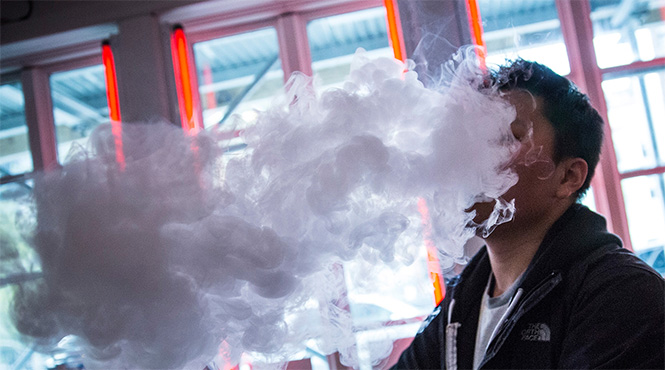 Speaking at the White House on Wednesday, Conway drew a line between two groups of flavors -- tobacco and menthol on one side, and mint, fruit and all other flavors on the other. The latter group appeals to kids and the White House must address use by minors, she said.

She also said the Department of Health and Human Services has jurisdiction over e-cigarettes but not over vaping and vape shops, though the terms are often used interchangeably. The Food and Drug Administration is expected to issue guidance on the policy this week.

“This is a burgeoning health crisis; the difference is between kids and adults,” she said. “So HHS and FDA have jurisdiction over cigarettes and e-cigarettes under the Tobacco Control Act. They do not have jurisdiction over vaping and vape shops, for example. So, if we’re talking about e-cigarettes, the president, yes, he’s been discussing this with his team and he will, or HHS, will make an announcement soon.”

Her remarks indicate the White House will likely press ahead with restrictions on all other flavors beside tobacco and menthol -- a softening of a plan announced by HHS Secretary Alex Azar in the Oval Office in September, when he said menthol, mint and every flavor other than tobacco would be banned.

The comments indicate there may also be some kind of a reprieve for vape shops, who’ve mounted widespread pushback to a ban and warned it could cost both jobs and votes in 2020.

“Kids report they use mint, and other flavors like mango, bubble gum, tutti frutti, unicorn milk -- pretty remarkable -- and that they don’t care for menthol,” Conway said Wednesday, adding that menthol tastes like tobacco.

She said that either President Donald Trump or HHS will make the announcement soon.

Regulators have been trying to find a way to limit youth use of e-cigarettes. Recent data have shown a sharp increase in the number of underage people vaping; according to the 2019 National Youth Tobacco Survey, about 4.1 million high-school students and 1.2 million middle-school students will have used vaping products at some point this year.

Paul Blair, the director of strategic initiatives at Americans for Tax Reform and a proponent of e-cigarettes, said the comments indicate that the administration may exempt adult-only vaping shops from restrictions or bans.

“My hope is that this is an acknowledgement that vape shops should continue to exist and sell reduced-risk nicotine products to adult smokers,” he said in a phone interview. “If there is an exemption for vape shops, I think the administration has acknowledged the political and policy importance of preserving vaping for adults.”