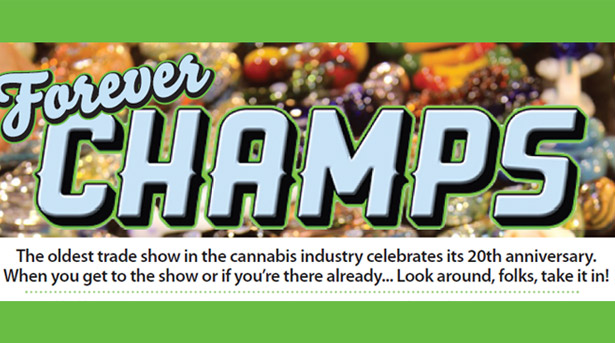 This is the fifty-fifth trade show mounted by CHAMPS and the fortieth staged here in Las Vegas. Hundreds of businesses are represented in a space that encompasses 245,000 square feet, the area of four and a half football fields!

The marketplace is booming and CHAMPS is proud to have backed the cannabis business community for two solid decades. No trade show is older and, certainly, no event associated with the use of cannabis can equal its rate of growth. In truth, CHAMPS is the unsung success story of our industry.

Of course, being “unsung” was a conscious business decision. Twenty years ago, sherlock pipes, one-hitters, bongs, hand pipes and the like were as demonized as cannabis, courtesy of a 1994 Supreme Court decision (Posters ‘N’ Things, Ltd. v. United States), a ruling that still stands today. The Court rendered ceramic, metal and glass pipes—even rolling papers—all “drug paraphernalia” these items, commonly found in head shops, were deemed designed for use with illegal drugs. In other words, the pipe itself has “intent,” not the user. It didn’t matter that this illegal paraphernalia could also be used to inhale tobacco or an alternative smoking mixture. The Court had spoken.

That made selling a bong a bit problematic. In fact, in those bad old days a pipe dealer or a customer who uttered the word “bong” could be thrown out of a head shop in every state. Even the display of a cannabis leaf itself was dangerous and could lead to harassment, if not prosecution. In this uncertain atmosphere, Peter and Jeff founded CHAMPS.

The year was 1998. For a few years, paraphernalia companies had successfully showcased their merchandise at one of the largest wholesale trade shows in the nation. But that September the rug was pulled out from under those vendors. U.S. Customs officials warned that show not to allow the purveyors of illegal pipes to purchase vendor booths.

Peter Gage and Jeff Hirschfeld had invested heavily in Gage Water Pipes, their own company. They had bought booths at the show for the company but were abruptly closed out. Which brings to mind what Albert Einstein said: “In the middle of every difficulty lies opportunity.”

“We reacted,” recalls Jeff . “Peter and I both had trade show experience. We saw the empty space that had been left behind. So we got an insurance policy, signed a contract with the Gold Coast Hotel & Casino and we got busy.”

The first show made its debut in February 1999 at the Gold Coast. It included just thirty-four 7’ x 8’ booths in a ballroom that comprised less than 4,000 square feet. The show was undeniably small, but they were heartened by the enthusiastic response of pipe sellers, especially the community of glass artists.

Back then, CHAMPS was known as the C.T.A. Show. The initials stood for “Contemporary Tobacco Accessories.” It may have been a bit disingenuous, but running a trade show that provided a business-to-business setting for paraphernalia manufacturers and head shop owners necessitated discretion. In other words, they hid in plain sight.

It was standard procedure for Jeff and Peter to decline coverage of the show by marijuana-themed publications. “You have to understand the level of paranoia at that time,” Jeff says. “We didn’t want to be a target. It’s the way the manufacturers wanted it. It’s the way head shops wanted it and the way we wanted it. Otherwise, vendors and buyers wouldn’t have come.”

Peter says they can laugh now. “Back then, everyone’s booth featured signs that read ‘For Tobacco Use’ only. But we had no choice. Th e head shop owners posted the same signs in their shops. Everyone had to distance themselves from pot in order to do business.”

Still, the trade show thrived, moving on to convention centers from hotel conference halls. Signifi cantly, its meteoric growth coincided with the rising popularity of glass smokeware. Although Bob Snodgrass, known as the “Godfather of Glass,” had developed his techniques for glass pipe-making in the 1980s, it wasn’t until the mid-‘90s that these new instruments of pleasure emerged widely on the cannabis scene.

“We have always backed the glass community and tried to promote high-end glass, as well as the artists themselves,” Peter says. “After twenty years, we really have become a family.”

In the cannabis industry, the cultivators and the consumers are the two target markets of all business. Unfortunately, since the beginning of the War on Drugs, the federal government has focused on arresting and prosecuting the two same groups. In February 2003, the Feds decided to take down the paraphernalia industry, launching Operation Pipe Dreams and Operation Headhunter. Fifty-five people were busted for engaging in interstate commerce to transport drug paraphernalia.

The raids shook up everyone. Were more on the way? Attorney General John Ashcroft labeled those who manufacture paraphernalia “no better than drug dealers.” Websites advertising glass pipes were taken down instantly, and head shops cleared their shelves.

The raids also happened to be launched on the eve of the C.T.A Show. Nervous vendors canceled. The number of businesses scheduled to attend dropped from 180 to a mere 34. On the bright side, Jeff and Peter did open the doors and got through the show without government harassment.

“We were nervous and on edge the whole time,” says Jeff . “I was worried about our clients and our show. But we stood by our people. We off ered full refunds or full credits toward future shows. I remained confi dent that we’d continue and survive.” In order to escape further scrutiny, C.T.A. vanished. Jeff and Peter pivoted away from tobacco and smoking and renamed the show. Th e C.T.A. trade show became C.H.A.M.P.S, an acronym for “Contemporary Handcraft ed American Made Products Show. Th e name highlights “America’s diversity of products and the creditable glass art industry,” Jeff says.

That would be news to—well—just about everyone. Since 2003, ten states, plus Washington D.C, have legalized recreational marijuana. Thirteen states have decriminalized, but not legalized, and thirty-three have legalized medicinal use. Needless to say, businesses that serve both consumers and cultivators have multiplied exponentially.

Not surprisingly, CHAMPS growth has been impressive—more booths and more attendees each show. Plus, new features have been added to the event. In 2010, CHAMPS hosted the first Las Vegas Flameoff, with scores of artists squaring off in an on-site competition to create superlative glass art pipes. The Flameoff has evolved into the Glass Games with substantial cash prizes awarded in an array of categories.

At this special anniversary show here in Las Vegas, CHAMPS is introducing CHAMPS Dispensary Plus, an entire division of vendor booths dedicated to meeting the demands of the burgeoning dispensary scene in states that have legalized cannabis. You’ll find banking services, insurance groups, and credit card companies among those businesses addressing the needs of commercial cannabis sellers.

Las Vegas is CHAMPS’ home base, but the trade show now stages events in Denver, Orlando, and Atlantic City, with plans for shows in Michigan and New England in the near future. “When a state goes legal, we’ll be there to support it,” Jeff says confidently.

Is there a secret to CHAMPS’ success? Not really. Jeff insists: “We listen to the community. I like to think that I treat CHAMPS in the same way I treat my life and my family— with respect. We believe in what we do, we do it well and we get better with each show.” Peter puts it more simply: “The buyers power the CHAMPS Show.”

It’s an obvious truth. The buyers at CHAMPS are very similar to the traders who traveled the ancient Silk Road, the merchants who transported the precious goods of artisans in faraway lands back to the civilizations who crave them. Like them, the buyers at CHAMPS have access to the very finest products of the retail cannabis industry. And they’ll travel back to their own hometowns to delight their clients with new treasures wherever they do business. Best of all, the promise of legalization is legitimizing their commerce at last.

CHAMPS proudly continues to grow and flourish. As CHAMPS kicks off its third decade, Jeff, Peter and the entire CHAMPS team want to thank all of you for being a part of the family!