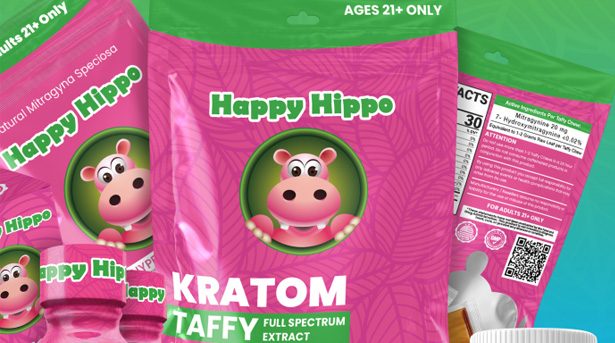 Come on, you’ve seen that happy, yet goofy pink hippo presiding over many retail shelves. Ever wonder how it started? Happy Hippo Herbals was founded in 2013 by Christopher Deoudes who serves as CEO of this industrious, growing company located in Boise Idaho

2013. Wasn’t that the year that Iron Man 3 and Hunger Games – Catching Fire ruled the box office and the words “twerk” and “selfie” were added to the dictionary? How things have changed since then. This is especially true for Happy Hippo Herbals and the public’s opinion about Kratom. Happy Hippos Herbals went from having less than 10 employees working remotely to now having almost 40 employees in two production buildings and two office buildings. They continue to grow and plan on moving to a bigger 40-50k square foot location in the future. Deoudes explains, “When we first kicked off the company, we only had a handful of strains and other herbs to put on our website. Now, we have over 30+ strains, custom formulations, rare alternative herbs, and merchandise.”

How and why did this all start, especially as far back as 2013 when CBD was even still thought of as a bogeyman nevertheless Kratom? According to Deoudes, “I just wanted to give newbies (who never heard of Kratom) access to a super high-quality source. The same Kratom I’ve used for 16 years. The same Kratom that I KNOW works and is impressive.” Deoudes goes on to say, “Unfortunately, ‘cheap and grainy junk’ will be most people’s first experience. They don’t know any better, so they never try Kratom again. That is heartbreaking, seriously. Many who stand the most to gain -will never try Kratom again because of their first underwhelming experience.” High-quality and safety in this case go hand-in-hand. Happy Hippo’s Kratom is heat sterilized at 170 degrees, lab tested for pathogens, and certified by the American Kratom Association for Good Manufacturing Practices.

Happy Hippo Herbals intends to educate the public about this natural plant that has suffered such a poor reputation. According to Deoudes, “We want to spread the word about something that has helped us personally improve our quality of life.” Deoudes believes that Kratom will follow a similar acceptance path as CBD. “I see Kratom following CBD and becoming mainstream in 3-4 years. For me, Kratom is like CBD, but works 10x better.” He believes, like CBD, Kratom is safe and helps FAR TOO MANY PEOPLE for the government to be successful in banning it due to indifference of public support. He confirms, “Kratom is safe and it works. The cat is out of the bag and the genie is out of the bottle.”

Kratom may have had a reputation for being just for “burnouts” but this is far from the truth. Happy Hippo Herbals’ target demographic is made up of people between the ages 30-40 who are resourceful, educated, and financially savvy. According to Happy Hippo, college students, mothers, fathers, veterans, Wall Street managers and teachers all benefit from Kratom. The appeal seems to be massive as anyone who deals with discomfort can benefit from the “slower” Kratom strains.

The benefits of kratom are serious, but their branding may be anything but. Happy Hippo's branding is happy, fun, noticeable and modern. This is far from the regrettable boring, dirty, "legal high" look that has presided over the industry and done so much damage. Deoudes explains, “We have found success with our bright pink and happy brand in retail stores. We want to present a happier side to Karatom- basically the complete opposite of the boring, dirty, dark, and dreary branding that is elsewhere."

Happy Hippo has served over 100,000 online customers aided by their high-quality website and their growing energetic sales team and enjoys an astounding 48% re-order rate. They want to make Kratom available to retail customers as well so they are trying to get into as many retail stores as possible. (Retailers can reach out to their sales team at sales@happyhippoherbals.com). Currently, one of their most popular retail items is their energetic Liquid Kratom “5-Hour Energy-esque” shots due to its convenience. This item is perfect for those who lean heavily on caffeine from coffee and energy drinks. Kratom veterans enjoy their raw Kratom powder because it is so much more potent than other vendors. And Happy Hippo is not resting on its chubby pink haunches, they are developing three new revolutionary products launching by the end of 2021 and hope to branch out in the “health and lifestyle” domain.

Deoudes boasts that Happy Hippo Herbals achieved the “Best in Kratom Ever Award.” Which was awarded to them by “everyone who has tried Happy Hippo!” Additionally, he explained that proceeds from Happy Hippo sales go to their charity – The Deoudes Children’s Foundation.

Now you know all about that happy, goofy pink hippo so keep an eye out for Happy Hippo’s new products coming at the end of this year!