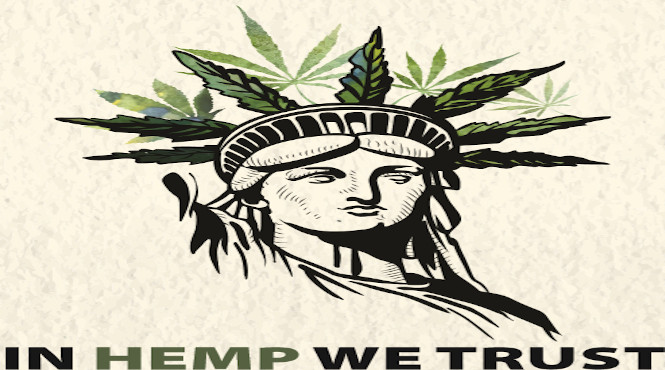 In Hemp We Trust

Cannabis is one of the oldest recorded plants on Earth. Fossilized cannabis pollens have been discovered dating back 19.6 million years and originating in China. Mankind has always had a relationship with this plant. Euro-Asian cultures have used the cannabis plant for medical and spiritual purposes for centuries. There have been burials found dating 2,500 years ago containing two pounds of seeds and thirteen whole hemp plants in which the remains were shrouded in hemp. This signifies its importance in the medical and spiritual use in the early civilizations. Hemp has always been a part of human survival.

Cannabis has been used for food, textiles, medicine, paper, fuel and building materials in addition to countless other uses. Cannabis plants and homo sapiens have always had a symbiotic relationship. Hemp fiber has both soluble and insoluble fibers which make it perfect for human digestion. Research has shown that 91% to 98% of the hemp protein is digestible. Generally animal proteins are more easily digested than plants but not in the case of hemp. Hemp seeds are rich in healthy fats and essential fatty acids. They are also a great source of protein and contains high amounts of vitamin E, phosphorus, potassium, sodium, magnesium, sulfur, calcium, iron and zinc. Our brains come pre-wired with an Endo Cannabinoid System (ECS) and receptors ready to read and receive cannabinoids found in cannabis. This plant is an essential to human survival. There are a vast amount of medical properties contained in cannabinoids that can treat endless number of medical conditions and diseases. These cannabinoids can also promote well-being and a balanced, harmonious and healthy body. Science has just begun to scratch the surface and unlock the secrets of cannabinoid compounds such as CBD, THC and CBG. There are hundreds of unique chemical compounds that could be the key to unlocking its potential for scientific and medicinal uses. We are just now tapping into this ancient medicinal plant that has been used since the dawn of time. Cannabis has also provided income and stability to mankind. It’s easily cultivated, and different varieties can be grown virtually anywhere on Earth. It can be grown in deserts, jungles, and there are even varieties can even grow in arctic climates. With its short growing cycle of approximately 100 days, hemp can provide food, shelter, rope, clothing, and medicine to aid in human survival. You can grow a crop quickly and inexpensively with zero pesticides and a small amount of water. Hemp has provided resources and been a staple crop for farmers. “Hemp is of the first necessity to the wealth and protection of the country” stated Thomas Jefferson. During World War I the government required farmers to grow hemp to provide for wartime efforts. The Army had a campaign called hemp for victory which encouraged American farmers to grow hemp. In the 1938 Popular Mechanics magazine referred to cannabis as “the first billion-dollar crop”.

Due to the prohibition of cannabis the value has grown exponentially. A pound of high-grade cannabis will sell for over $6000 in a legal taxed market, which wouldn’t have been possible pre-prohibition. Now as the reformation unfolds, we have an opportunity to redistribute the wealth from industries that have manipulated us and coerced their markets. A new generation of cannabis activists and daring entrepreneurs will be the beneficiaries to one of the biggest industries the world has ever known. Just imagine if we stopped purchasing petroleum and diverted that money to global farmers living throughout the nations. With a plant that has such a high value and grows easily everywhere we have a chance to end human struggles and failed financial systems. Imagine a world where all people could afford the basics of life and spend more time enjoying the beauties of it. If we were to grow our fuel using quickly growing plants, we would remove millions of tons of carbon dioxide and toxic gases from our air, soil and water. Both Henry Ford and Rudolph Diesel designed their combustion engines to runoff such a fuel. Renewable plastics can be made much easier and more economically from vegetable cellulose rather than using petroleum. The stalk contains graphene which can be used in batteries and superconductors. Another use for the stalk is hempcrete a cement like material that is much lighter and stronger than concrete. There are bridges in France over 800 years old made of this material that cars still drive on today.

Why not divert hundreds of trillions of dollars from the pharmaceutical companies, paper industries who deforest the planet and energy industries which are manipulating nations and causing endless wars. A vast amount of the bigger problems we have as a human race all stem from the limited nature of petroleum and the empirical fight to control it. Empires are won and lost due to middle eastern oil concessions. I strongly believe we can change the way we live as a species and live in a world of abundance where we all work together as brothers and sisters. The root of all aggression and oppression comes from control of resources and lack of wealth distribution. If everybody had enough money and could create industries from this plant to support their social and economic needs then there would be no war or religious beliefs being used as a shield and cloak to control and divide us all. In hemp we trust. This is my mission.