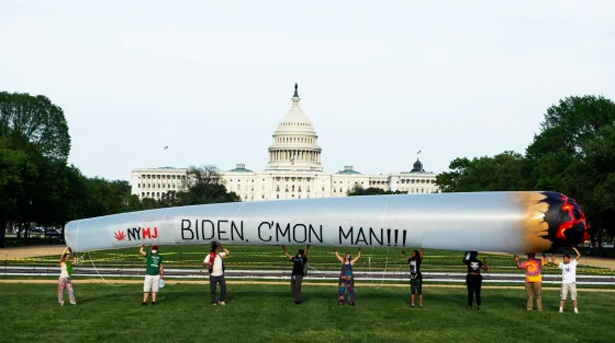 The proposal calls for removing marijuana from the Controlled Substances Act. Eighteen states and Washington, D.C., have so far legalized recreational pot.

Senate Democrats, including Majority Leader Chuck Schumer of New York, plan to reveal a draft bill Wednesday to end the federal prohibition on marijuana — a move that comes as 18 states have already legalized pot for recreational use.

"The Senate has to catch up with the American people," Schumer said.

President Joe Biden supports decriminalizing marijuana on the federal level and expunging convictions, as well as rescheduling it as a Schedule II drug so it can be more easily studied, White House press secretary Jen Psaki told reporters in April. Biden supports leaving decisions about legalizing recreational pot to the states, she said.

The Cannabis Administration and Opportunity Act would remove marijuana from the Controlled Substances Act, expunge federal convictions for nonviolent marijuana offenses and establish a way to tax marijuana.

The Senate has the slimmest of majorities — 50-50, including the two independents who caucus with the Democrats, and 51 with the vice president breaking a tie.

A summary of the discussion draft, sponsored by Schumer, Cory Booker, D-N.J., and Ron Wyden, D-Ore., says states would still be able to decide their own laws about marijuana. The text compares proposed regulations to those for alcohol, sales of which states are free to prohibit.

Supreme Court Justice Clarence Thomas, one of the court's most conservative members, wrote last month that federal laws against use or cultivation of marijuana may no longer make sense.