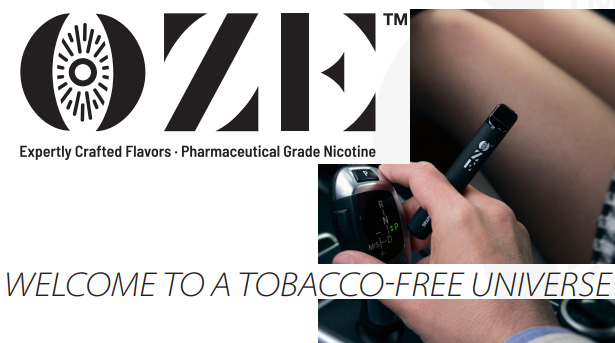 WELCOME TO A TOBACCO-FREE UNIVERSE

OZE was founded in 2020 in Florida with one defining mission: to help consumers all over the world quit smoking tobacco for good. To support their mission, the team at OZE knew they would need to provide an alternative delivery system for nicotine with great flavors, superior function and quality, in a product that is distinctly different from the vape products already on the market. How would they accomplish this? The answer was found in a highly complicated process that would result in a pharmaceutical grade, tobacco-free nicotine.

David Sandelovsky (President at OZE), along with his founding partner, share decades of investment banking experience in highly regulated industries and compliance. The high moral ground on which they have developed the company was built from their professional background combined with their personal passion for helping people alleviate the damage caused by smoking combustible tobacco. In a similar vein, it was very important for them to gear their marketing and flavor names toward adults. Their target market is the middle class professional who enjoys the nicotine kick, but is looking for a safer, high quality alternative to cigarettes. Since conception, the company has had a strict age verification policy for every online buyer revealing the average age of their customers, both men and women, as 35 and above.

Not all tobacco-free nicotine is made alike. OZE’s pharmaceutical grade nicotine with its barely detectable impurities, is next level, virtually flavorless, and only made possible through a patented process that is not easy to do, nor inexpensive. For this reason, OZE is the first to bring this quality of tobacco-free nicotine vape pen to the market. Other nicotine products on the market often utilize flavors to mask the unpleasant taste of the chemical-like flavor of their nicotine. OZE’s pharmaceutical grade nicotine is of the highest-grade purity, leaves no after-taste, and thus pairs perfectly with their American made, high quality food grade flavors. Their standard that “The last puff should always taste the same as the first” is achieved through the use of superior hardware and ingredients. Their tobacco-free nicotine status allows the company to offer a variety of flavors in their vape pens, which would not be permissible using nicotine extracted from tobacco. Currently, OZE offers 12 popular flavors in their disposable vapes at 5% nicotine, such as Lemon Tart, Berry Mix, Velvet Tobacco, Pineapple Ice, and Mint.

The OZE Difference: tobacco-free S Nicotine that is an exact match to the molecular structure of tobacco-derived nicotine, but superior. The difference lies in the removal of the R-isomer present in other synthetic nicotine. OZE refuses to compromise on quality, which is why their products only contain S-Nicotine. Most other tobacco-free disposable vape products contain R+S Nicotine which causes an inferior experience. To successfully mimic the nicotine punch of the tobacco derived nicotine, the molecule needs to be S-only. To fully isolate the S isomer, removing all traces of the R isomer from the nicotine is a difficult, time-intensive, expensive process, but OZE believes it is worth the cost.

OZES-Nicotine is pure, with no harsh taste left over from processing chemicals. OZE offers the purest S isomer, tobacco-free nicotine in a disposable device with 12 flavors. This is why OZE has recently been receiving demand from several countries’ leaders for their vapes to help reduce the rate of addiction to combustible cigarettes in their communities.

Nicotine, albeit highly addictive, is not as much of a health concern as the damage caused by tobacco due to the chemicals released when tobacco leaves are combusted, which are the main culprits in cancer caused by smoking.

“According to some evidence from surveys of e-cig users, it seems that vapers feel less dependent from e-cig than they used to be from smoking. With time, they tend to use lower levels of nicotine concentration in the e-liquid they use, and they rate themselves as less addicted on dependence scales. This could be supported by a recent study in rats, showing that total tobacco extract, particularly when extracted from rollyour-own tobacco (more than cigarette tobacco) seems more addictive in rat self-administering it than pure nicotine.” -Neurologist Dr Jacques Le Houezec (the Honorary Lecturer, UK Centre for Tobacco Control Studies, University of Nottingham, England, a founder and member of The Society for Research on Nicotine and Tobacco)

This is why OZE understands the future of nicotine to be one absent combustible tobacco. Their tobacco-free mission starts with aiding consumers to kick the tobacco smoking addiction by switching to tobacco-free nicotine as a safer, and less addictive alternative. To further their overall goal, the team is working to produce 3% and 0% nicotine vapes in the near future to allow users to decrease their use of nicotine altogether, over time. These reduced nicotine lines will be made available late summer 2021.

Their dream is to have their device one day be accepted as a medical device to wean people off smoking cigarettes. You can find OZE exhibiting at TPE and Champs trade shows this year.