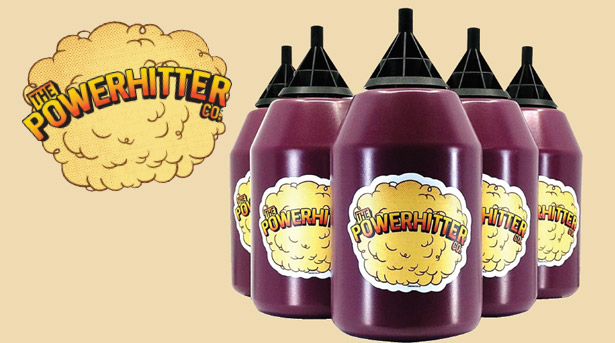 My name is Allen, one of the co-founders of The PowerHitter Co™ along with my wife, Daphna - and our good friend Jonathan and I’m thrilled to tell you our story. Back in the 1970’s, the legendary “power hitter” was the quickest, easiest and most fun way to extract maximum hits and enjoyment from a smoke. We’ve taken cues from that classic design and upgraded it with modern materials to create this generation’s ultimate smoking experience. When I was in college I discovered this crazy “thing” from a friend’s older brother in the parking lot at a Grateful Dead show. I had never seen anything like it … he called it the “power hitter” -- and it blew my mind! It was so much fun and easy to use! I rolled one up, lit it and inserted it into the custom holder inside the back-end of the cap. Then, I screwed the cap back on and just covered the carb hole and squeezed. It blasted me with a steady stream of smoke from the nozzle. MY FIRST POWER HIT!… and, it was a moment of enlightenment!

I knew I had to have one of my own. As fate would have it, by the end of that concert my friend’s older brother graciously gifted me his. For the next ten years, I took my power hitter everywhere - from festivals and concerts to whitewater rafting the Colorado River and hiking the Pacific Crest Trail, my power hitter was a constant and reliable companion. It was a conversation starter wherever we went and quite r egularly, the life of the party!

Until I lost it. Such a sad day.
Devastated. I searched for a replacement. My hunt continued for over a decade. Later on, I found and bought a knock off online. Of course, the cherry fell off and burned a hole in the bottom the first time I tried using it. Disappointed but undeterred, I kept searching. Finally, an eBay listing for a vintage version ended my search. I found two of them and paid over $250 a piece. … and then almost instantly, I had an epiphany!

If I wanted one so badly then I believed others would too. However, not at these prices or made so poorly. I figured that there was an entire generation who vividly and fondly remember having one, using one or knowing someone that did. People with a lifetime of great memories all attached to their experiences using a power hitter. Plus, there are generations that have never even heard of one yet. I believed the market had to be huge!

That was it. I was convinced that I had to figure out how to produce the best quality PowerHitters™ and make them affordable. Utilizing my years of expertise in product and business development I pulled my team together. We had some serious work to do.

Tons of research and development went into producing our first new proto-type. We wanted to make sure that it squeezed properly and definitely needed to insure a cherry popping off wouldn’t burn a hole in the body. We learned many nerdy things as we moved towards production. Perfecting the smokability was quite a chore. Material safety was an important factor. We scoured studies helping us discover the average size of rolled joints today vs 30+ years ago -- so we had to make the joint holder a bit bigger to accommodate today’s pre-rolls and tastes. We learned that the average temperature of a “cherry” of a lit smoke sitting idle is 1112 deg F (580 deg C.) and when your taking hit: 1292 deg F (or 700 deg C.) Shore hardness AKA how squishy/squeezable the body is - was one of the keys. We want the PowerHitter™ to take huge streaming hits -- and be ready to hit immediately again and again. Year after year. Tooling/ Mold revisions were numerous and costly. We had to get them just right AND WE DID! We found the magic formula! It wasn’t cheap or easy to improve a nearly perfect product - but we did it. In the end, we built the perfect smoking accessory that works even better than the original.

It was time to test the market.
We launched a successful crowdfunding campaign on our own platform. The hype was real. Old school legacy users from the 1970s and 80s came out in droves. We also found a supportive and excited new audience in younger people that had never even heard of the PowerHitter™ before. No advertising. Zero social media. Nothing whatsoever. We killed it.

It was time to scale the business. We set up our shipping and logistics infrastructure and launched our online store, dropshipping and wholesale programs. Tens of thousands of PowerHitters™ began hitting the retail markets.

The positive feedback was overwhelming.
We started getting emails from people after they received their PowerHitter™ telling us how much they loved it. “My dad had one of these!” “I haven’t seen this in ages!” “Boy do I have a story for you!” “I was at a Dead show…” (you know how those stories go). The most popular theme was, “I’ve been searching for one of these for years!”

Everyone was stoked to finally “hit it”!

“I just got my order and my husband is near tears he’s so happy!! I didn’t know he used to have 2 of these way back when. He loaned both out and both never returned. He looked for new ones and couldn’t find them so he just gave up the hope he would ever have one again. This one arrived today and he is absolutely THRILLED!! Thank you for helping to make me the wife of the century!”

Our Social Media fan base began growing exponentially. Younger people who previously had no clue PowerHitters™ ever existed not only embraced the product - they love it as much as the old timers. Videos from users consuming and having fun with theirs came in from around the world ... even from multiple generations, like the father and son who record and post “Old school vs New school” PowerHitter™ sessions they enjoy together almost weekly!

It’s always entertaining to see people taking Power Hits, squeezing and shotgunning for others providing a seemingly safer way to share a smoke, especially with today’s social distancing. Nobody wants cooties these days - more than ever! In an uncertain time where health and safety are paramount, we are ecstatic the public has discovered The PowerHitter™ and its many benefits. The Power- Hitter™ blasts a steady stream of smoke directly into your mouth (or nose) with zero contact on the nozzle required, making it is seemingly one of the most sanitary ways you can smoke a pre-roll.

Since the PowerHitter™ captures 100% of the smoke, there is zero waste – which means the only smoke you’re putting in the environment is coming from your lungs. Plus, you can smoke every millimeter of a pre-roll without worrying about roach clips or burning your fingers.

Do you enjoy smoking in bed? No worries! Avoid burn holes in your comforter or sheets, clothes and your skin. Since the PowerHitter ™ is a totally self-contained unit, you won’t have to worry about ashes or hot embers hitting your bed ever again.

Last, but certainly not least, since the PowerHitter™ is virtually unbreakable, you can literally toss it across the room – giving new meaning to ‘Puff, puff pass!’

Today, business is brisk as more head and smoke shops discover they can now find high quality PowerHitters™ with deep margins. Reorders are often almost immediate and requests come in for more POS materials daily. We ship large posters, as well as, small 4x6 display cards that fit neatly on shop shelves or counters showing instructions on how it works. We listened to our retailers as shelf space is a premium and they discovered quickly these help lift sales.

Everyone on our team is committed to helping our retailers sell through. You can place an order online, over the phone (we love meeting new people and talking shop), or through a select number of distributors. Whether you are a large chain or a mom and pop shop, every one of our customers are part of the PowerHitter community and we are all committed to our mutual success.

You’ve heard of the Ten Commandments, right? Well, we only have ONE: “Don’t lip it! Just grip it and rip It!”