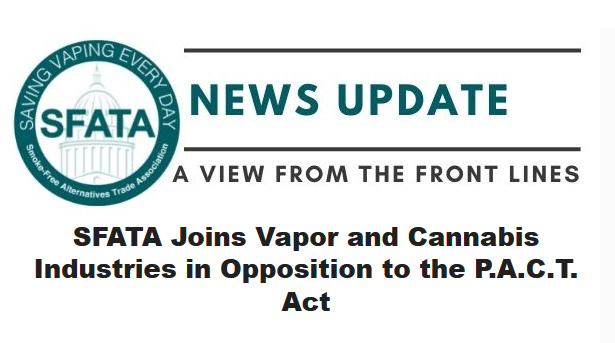 SFATA News Update: A View from the Front Lines

On Friday, July 16th, the Smoke-Free Alternatives Trade Association joined a number of industry associations and independent business owners from both the vapor and cannabis sectors, in signing on to a letter addressed to Dr. Rand Paul, Ranking Member of the U.S. Senate Committee on Small Business and Entrepreneurship, in opposition to the PACT Act.

The letter began by stating, “We, the below signed stakeholders, have serious concerns with the United States Postal Service (USPS) Proposed Rule on the Treatment of E-Cigarettes.” From there it went on to address two key points.

That the Proposed Rule is counter to the principles of the Regulatory Flexibility Act and will have a devastating impact on small businesses.

If you are not familiar with the Regulatory Flexibility Act (RFA), you can learn more about it here:

In summary, the RFA requires agencies to consider the impact their rules will have on small business. The agencies must also evaluate alternatives that would accomplish the objectives of the rule without over-burdening small business when the rules impose a significant economic impact on many small businesses. Fundamental to the RFA is Congress' desire to remove competitive barriers and to encourage agencies to customize regulations to the size of the regulated entities.

Although the USPS claims that they do not need to comply with the RFA, the letter makes a solid argument to the contrary.

That the Proposed Rule exceeds its statutory authority by capturing products beyond the express legislative text and clear legislative intent.

As written, the Proposed Rule currently expands the definition of ENDS beyond tobacco and nicotine-containing devices. An item can qualify as an ENDS without regard to whether it contains, or is intended to be used, to deliver nicotine; liquids that do not actually contain nicotine can still qualify as ENDS, as can devices, parts, components, and accessories, regardless of if they are intended to be used with nicotine or not. This creates a major problem for other industries — hemp and cannabis particularly so. It also creates an increasing level of difficulty on our member businesses, most of which have diversified to remain open after a number of blows to the vapor market preceding a global pandemic.

I believe most, if not all, of us have seen the impact of both points in the last few months. From increased shipping pricing to difficulties in obtaining e-liquid components and accessories that were never intended to be considered non-mailable under the PACT Act – in fact, the very name “vapor” in a business name can trigger a shipping disaster… one that our member businesses and those within the vapor industry simply cannot afford.

You can read the letter in its entirety on the Resources tab of our website. Choose the Media option from the toolbar and scroll down to Other Information.

Or type www.sfata.org/media into your browser and once that page opens, scroll down to Other Information.

SFATA would like to give special thanks to Michigan-based O2Vapes for its role in launching this letter, and to Azim Chowdhury for quickly obtaining the signatures of a diverse range of industry stakeholders.

Many thanks to all of you for your continued support!

With you, as always, in the trenches,
April L. Meyers on behalf of SFATA Leadership